Group Exhibition / Exposition collective
Ancienne Nonciature & Spazio Nobile
Collectible Furniture, Sculpture and Photography / Mobilier de collection, sculpture et photographie
Jörg Bräuer, Anne Derasse, Ernst Gamperl, Kaspar Hamacher, Amy Hilton, Silvano Magnone , Élise Peroi, Päivi Rintaniemi, Bela Silva, Fabian von Spreckelsen
In September 2021, “Le Sacre de la Matière” is ushering in its second chapter at the Ancienne Nonciature. This new exhibition brings together 10 artists whose lively and resilient minds meet at the heart of matter, between unity and duality, the very symbolism of the number 10. The Ancienne Nonciature is well known as a heritage site, an emblem of the period when it housed the embassy of the Vatican to Brussels as the residence of Cardinal Pecci, the papal nuncio who later became Pope Leon XIII. After its first edition in 2020, “Le Sacre de la Matière” is returning to this elegant historic building, which has become a prominent meeting place for the art scene. Owner Anne Derasse – interior architect, art historian and Belgian designer – has opened the doors to her Brussels home, in the Grand Sablon. With its carefully preserved aura, the Ancienne Nonciature offers an aesthetic respectful of the past, as well as a beautiful texture and quality of space and light, and has hosted significant exhibitions throughout the years. As a representative space, formerly dedicated to the splendours of the church, it is now an “Embassy of the Arts”. The daring and perseverance of Anne Derasse in the restoration of the site, united with the artistic vision of her companion Jörg Bräuer, led them on a quest for a new, modern identity, through the hosting of selective art exhibitions. At their invitation, Lise Coirier and Gian Giuseppe Simeone, art historians and founders of Spazio Nobile, first took on this unique artistic adventure. With this second exhibition “outside the walls” of the gallery, they are bring- ing to the site their philosophy and culture of authenticity, at the crossroads of fine and applied arts. Feeding the flames of this living and inspiring space, 10 creators will be featured, including Anne Derasse and Jörg Bräuer themselves, alongside Ernst Gamperl, Kaspar Hamacher, Amy Hilton, Silvano Magnone, Élise Peroi, Päivi Rintaniemi, Bela Silva and Fabian von Spreckelsen. All of these artists are represented by Spazio Nobile; unique pieces of their new artworks have been selected, in concert with the building’s owners. They are united around the very evocative theme of “Le Sacre de la Matière”, the guiding thread of a profound narrative, which takes on its full meaning in this once-sacred place, where the nobility of the soul and the essence of the material are sublimated.
L’Ancienne Nonciature, haut lieu du patrimoine et ambassade du Vatican à Bruxelles au XIXe siècle, devient un rendez-vous de la scène artistique telle une « nouvelle ambassade des Arts ». Spazio Nobile y tient sa première exposition « hors les murs ». À l’invitation des maîtres de maison et créateurs Anne Derasse et Jörg Bräuer qui sont partie prenante dans l’exposition, Lise Coirier et Gian Giuseppe Simeone, fondateurs de Spazio Nobile et historiens de l’art, impriment avec eux et „Le Sacre de la Matière“ leur philosophie et leur culture partagées de l’authenticité de la matière, des arts appliqués contemporains imprégnés d’artisanat de création et d’expérimentation, et de la noblesse des matériaux naturels qui se patinent au fil du temps.
9.9-3.10.2021 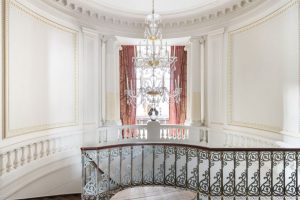 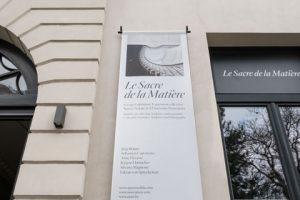 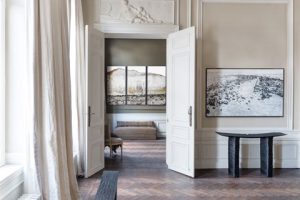 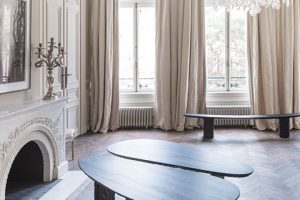 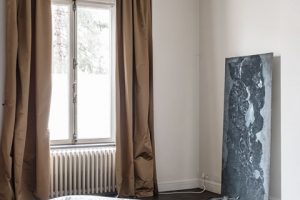 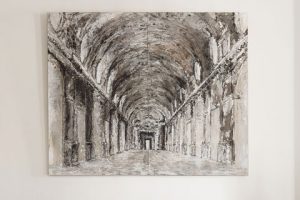 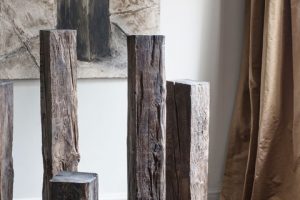 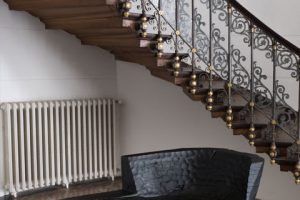 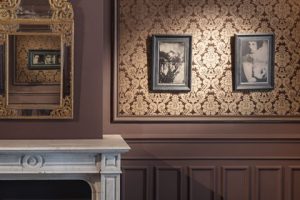 Finality without end: with these words, Immanuel Kant, in his Critique of Judgment, expressed a relation between the aesthetic emotion, the judgment of taste felt before beauty in nature, which, if it does have an end or a raison d’être, is not really comprehensible to us, and is thus disinterested, and the sometimes analogous feeling experienced before beauty in a work of art.
The latter is motivated in its conception by virtue of the fact that it has a certain utility, which can make the object a piece of knowledge, and it is thus interested. When the aesthetic pleasure derived from a work of nature’s, like a flower, or a landscape, is the same as that derived from an artwork, then it is disinterested, without end – a finality without end. Finality without end is, as Claude Lévi-Strauss emphasized, a term used to designate “the absolute art work”. The objective of this approach in the presentation of the thirty works of tribal art which constitute our exhibition, and which all of course come from places far away from where Kant developed his inspiration and thinking, is to reveal a historical and poetic connection between these artists from distant lands and those of the Western world, which nowadays has the opportunity to contemplate these works. It may be said in favor of the Enlightenment movement, of which Kant was one of the most representative figures, that it exhorted a prevalence of reason, of knowledge and of open mindedness, over the sloth, and intellectual laziness and cowardice that dogmas generated. It was a hyphen between great minds, very literary ones, the tribal arts being a form of writing which, like a mytheme in mythology, all at once embraces a large concept whose elaboration obeyed a strict semiotic, in which each element is a sign. These creations and those that produced them were impregnated with an oral tradition, and oral literature, which had an importance whose importance we seldom realize the extent of, as well as metaphorical and poetic powers. It is obvious that this selection of pieces, these finalities without end, on view here at our exhibition and in the accompanying catalog, were created in an environment of intellectual emulation, in which aesthetic force expressed, as Kant described it, a disinterested human nature. Finality without end is also a play on the polysemy of words, because these displayed works of tribal art from the Congo, Gabon, Ivory Coast, and New Guinea, among other places, are finalities, completed works in their ancient and finished corpus, in which perfection and tender emotions are mixed, and which are still little or not at all known by the public. They are an extension of the end of a world, ultimate achievements that affirm, to paraphrase Claude Lévi-Strauss once again, that “they alone bear evidence that, among human beings, something actually happened during the course of time”. Since Lascaux, through these manifestations, this preserved glory is reassuring. Guardians and transmitters that they are, several eminent collectors honor us with their generous confidence by lending us, for the duration of this year’s BRUNEAF-CULTURES, these gems as they quietly acquire the status of a patrimony for all of mankind that they so richly deserve. 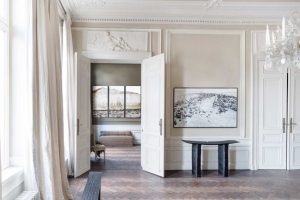 The Great Lobi Statuary / La grande statuaire Lobi
Les bois qui murmurent / Whispering Woods
This installation and the publication that accompanies it represent the realization of longstanding goals I have always had in mind and have always wanted to attain. Their purpose is to hone our understanding of the many sculptures produced by the various peoples who make up the «tribes of the Lobi branch». 1 Their figures are essentially anthropomorphic, and their names, such as thílkòtína, thílbià, or bùthìba, are derived from the uses which are made of them. The term bùthìba is sometimes translated as “speaking woods” or “whispering medicines”, and that has inspired the exhibition’s title “Whispering Woods”. The sculptures still speak here and now, in a language replete with semiotic meaning. They continue to whisper of that which the spirit of art has infused them with, and of the universal greatness that human works have the potential to achieve. In former times, when ritual cycles and initiations took place or when a mythological patrimony was activated, every “tribal” culture could reach a climax and generate a powerful intellectual emulation, and that fact ultimately brought us some of the most beautiful art works mankind ever produced, independently of any level of technological complexity that a culture had attained, or of any other inherited social characteristics. Lobi art, unlike widespread ideas about it suggest, adheres to this perspective fully, and that is what this exhibition intends to prove. Major Lobi statuary is discrete at first glance. Its lines are pure and simple, embellishments are absent, and the patina is dry. The thílkòtína are usually the most remarkable works. They are representations of “accomplished ancestors”, and survive now as individual parts of the couples they once were and that time separated. Indeed, the word thílkòtína does not appear to exist in the singular. Upon reading the text by Viviane Baeke which follows, one comes to understand that these figures are the culmination of a long process of ancestralization, whose completion also represented a milestone in the careers of the ritualist sculptors who created them. It is interesting to note that the most outstanding examples of such figures are also most often those that appear to be the oldest. There were many figures – some were more ephemeral, and did not have to be so flawlessly executed. Supremely subtle and spare, Lobi art’s brilliance stays hidden – hidden as it originally was in the shadows of a thílduù, the altar sanctuary to which only the head of household had access, and hidden today from the eyes of most people, having remained nearly entirely ignored by anthologies and publications on African art. The times in which Lobi art was considered relatively minor have come to an end, and it now deserves to accede to its rightful place in the pantheon of recognized classical African art forms. Serge Schoffel